Recently I had the misfortune of a positive COVID diagnosis. Fortunately, aside from a mild fever and a headache one morning, I had no issues.

That diagnosis, however, meant lots of time at home being quarantined. Don't worry - I (allegedly) had supervision: 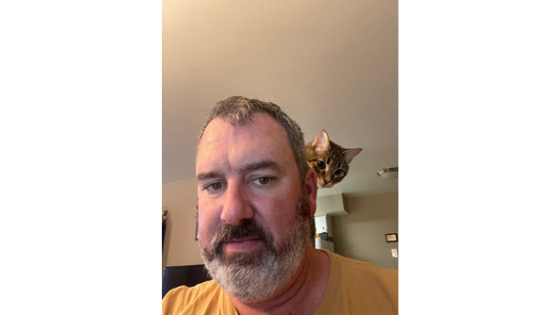 Among other things, I wandered down many rabbit holes and looked at many interesting items on the internet. One of the things that caught my eye was the Apparition SBR backpack from Grey Ghost Gear. That pack is designed to take a short-barreled AR15 or an AR pistol with a 10.5 inch or shorter barrel with the stock or brace collapsed. Additionally, the pack isn't a tacticool accessory with PALS webbing everywhere in a basic black or fancy FDE color. The packs are designed to look like a hiking pack. Yes, they offer a plain black option, but they also have a gray and black, black and red, black and teal, or green and tan. That's pretty cool, though I don't want to carry an SBR (an NFA item that requires either a form 4 for a commercially built rifle or a form 1 for a home-built shorty - both of which require a $200 tax stamp). Nor do I want to carry an AR pistol around with all of the shenanigans the ATF has been pulling with new rules around braced pistols lately.Next, I ran across the Shield Arms SA-15 folding lower receiver. That got me thinking (which is usually where the trouble starts to rear its ugly head)

Per Grey Ghost's website, the Apparition pack measures 27 inches tall. A standard 16" upper with a birdcage flash hider measures 24 5/16". Meaning that a 16" upper on a lower with an integrated folding mechanism might fit, albeit with very little room to spare. Which led to the next thought that an upper with a 14.5" pinned and welded barrel should save an inch or so over a standard 16" barrel with a muzzle device.

And that led me to build this: 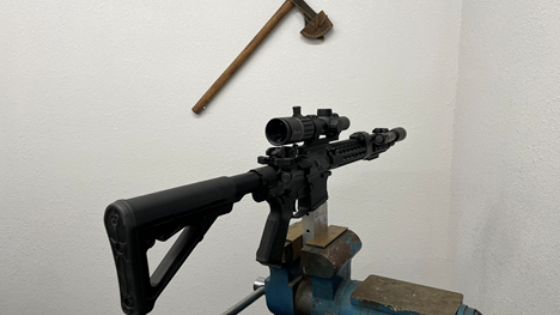 I fitted out the SA-15 lower with a mostly mil-spec parts kit. The grip is a Magpul MOE, and the stock is a CTR, also from Magpul. Since its intended use is as a truck gun for self-defense and anti-pig duty, I used an ALG QMS trigger. Basically, it's a mil-spec hammer, trigger, disconnector, and springs. Still, ALG cleaned up the engagement surfaces before hardening them to give them a clean break and reliable ignition, even if I'm using something like XM193 that has hard primers.

I used an AeroPrecision upper receiver with a Ballistic Advantage Hanson profile 14.5" barrel for the upper assembly, a Bravo Company (BCM) Mod 1 muzzle brake is pinned and welded into place, which brings the barrel length to 16", while still allowing me to attach my GemTech HALO suppressor. The bolt carrier group is a Battle Arms Development nitrided M16 type and has been working well with the upper, barrel, and Radian Raptor ambidextrous charging handle.

The handguard is a BCM 13" keymod. While M-lok has a lot to offer, I haven't found a low-profile M-lok sling attachment that I really like. Besides sling mounts, a Cloud Defensive Rein weapon light on BCM Gunfighter Keymod mount was the only thing I plan to keep on the rail, and I really like the BCM Keymod QD sling mounts, so I used a keymod rail.

I've been using a Burris RT-6 for 3-gun a couple of years now, and it's been a solid performer, so I decided to use one on this rifle. It's attached with a LaRue Tactical LT204 mount. In the unlikely case of an optic failure, I've got a set of Troy Industries backup iron sights mounted to the rail. Of course, I've got an XS Sights CSAT aperture and tritium stripe installed in those Troy flip-ups.

All put together; it does fit inside the Apparition bag, with a little bit of room to spare:

I chose to use Hornady TAP 5.56 with the 70-grain GMX projectile. The GMX projectiles are a solid copper hollow point with a good track record for punching through light barriers such as auto body and safety glass - two barriers that are likely to be encountered in my day-to-day life driving around Fort Worth.

Additionally, I've seen its excellent performance on feral hogs - I've shot three or four decent-sized hogs (150+ pounds) using the TAP, and, while it isn't my preference for wild pigs, it will work just fine with good shot placement. The solid copper GMX bullets are constructed solidly enough that even if you hit a rib upon entry, the bullet will hold together and punch through into the vitals. A 200-yard zero means inside 200 yards, a center chest hold on a varmint the size of a coyote or larger will yield acceptable hits, regardless of whether the critter in question runs on two legs or four. 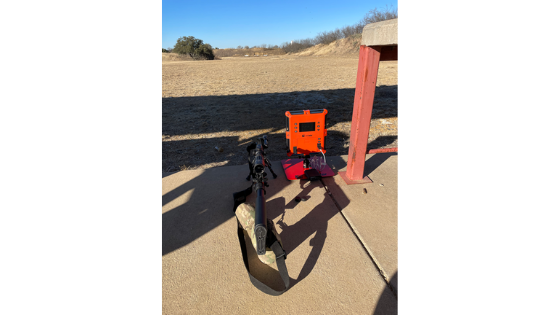 While not the most accurate carbine I own, it's accurate enough for the intended purpose. 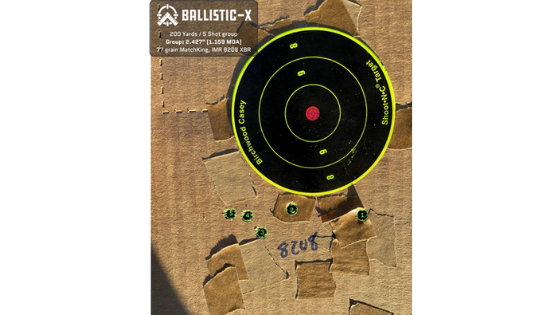 Additionally, with good match ammo, it will shoot around a 1.5 minute of angle group at 200 yards. Good enough that I'm definitely going to try it out at a local club 3-gun match just because I think it'll work decent enough.