It's time to Set your Sights on another drill! This time around, let's dig out a carbine and shoot the VTAC 2X2X2 drill.

SGM Lamb served in the U.S. Army for over 21 years, most of his time with the 1st Special Forces Operational Detachment Delta. Having seen action in conflicts all over the globe with Delta, SGM Lamb knows a few things about using a carbine in stressful environments.

For this drill, you'll need a carbine, at least six rounds (good luck on only trying this once!), three IPSC Metric/USPSA targets (or you could print out three of our Set Your Sights A-zone here), and a timer. The distance is about five yards, with a yard between each target. 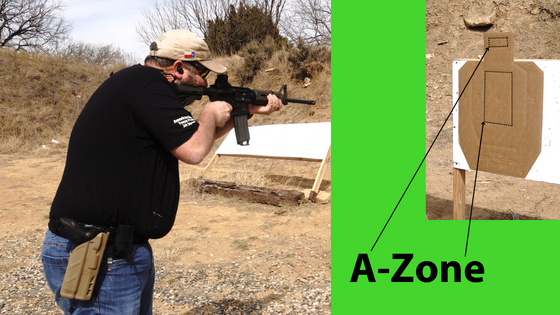 Practical Applications of the Drill

In most competitive or self-defense situations, we're likely to fire more than one round at a target. From a competitive standpoint, you usually need one "Alpha" hit or two hits on cardboard to neutralize the target and avoid a penalty.

In a defensive situation, threats should be engaged until they stop whatever threatening action that justified shooting at them. That could be one, two, or twenty rounds to solve the problem.

How to Complete the VTAC 2x2x2

Start with the carbine loaded, at low ready, safety engaged, finger off the trigger. On the buzzer, engage each target with two rounds.

Ideally, the splits (time between shots) and the target transitions should be almost indistinguishable at 5 yards. After you watch the video linked below, you'll notice that I was pretty consistent on my splits at about .17-.20. Ideally, I should have had my target transitions in the .20-.22 range.

I wasn't quite there this time around.

I've been slacking on close-range carbine practice lately, and my performance on this drill in the video confirms that.

It sounds like a simple drill, and it is. It's a mechanics drill that requires quick, efficient presentation to the target, good recoil management, rapid movement between targets, and good trigger manipulations. Still, it works several skills with a minimal amount of ammunition expended.

Let's break it down.

We're starting in a low ready with the carbine loaded and safety on. Personally, I like to get in the center of the target array and get a natural point of aim for the center target. I usually shoot this drill left to right but occasionally switch it up and work right to left. The 2X2X2 should be worked in both directions because in a competitive environment or in a self-defense situation, you may need the skill and confidence to quickly move the carbine to either side to engage a target.

Get a good athletic stance.

Feet should be about shoulder-width apart, with the gun hand foot slightly behind the support hand foot.

Keep your knees unlocked with most of your weight on the balls of your feet, with a slight lean forward at the waist. That will set you up to let your entire body work as a shock-absorber so you can manage the recoil and drive the gun back on target as quickly as possible.

Tips for a Successful Run

You've got to get the carbine up on the buzzer, establish an acceptable sight picture, and begin shooting. You need a good trigger press that won't disturb the sights, good follow through, and good recoil management – you want to get the second sight picture as soon as possible so that you can send the next round into the target in the shortest amount of time possible. Resetting the trigger should happen while the carbine is cycling and going through its recoil. As soon as it settles back on target and the sight picture is verified, work the trigger, and put the second bullet through the A-zone.

As soon as you break the trigger on the second round and you've called it a good shot, shift your eyes to the second target while driving the carbine towards it. Your eyes are going to get to the target before the rifle.

Use that time effectively to get the trigger reset. When the carbine reaches the target, ensure the sight picture is acceptable and work the trigger.

When you transition targets, stop the carbine before working the trigger. In the video, on my second run, I tried to shoot the last target while the gun was still moving. I got lucky the first round hit in the A-zone, but I still didn't stop the carbine and put the second round outside the A-zone on the right side of the target. Had I stopped the carbine like I was supposed to, that wouldn't have happened.

Get out, get some trigger time, and let us know what you think of the VTAC 2X2X2!