Alright, guys, it's time to set your sights on another drill! Let's break out the carry guns this month and work on the Bill Wilson 5X5 Drill.

Bill Wilson is the founder of Wilson Combat, which makes some truly beautiful handguns. He is also one of the founders of the International Defensive Pistol Association (IDPA) and, in the 1970s, 1980s, and 1990s, one of the big names in the International Practical Shooting Confederation/United States Practical Shooting Association (IPSC/USPSA). He represented the United States in more than one world championship. It's safe to say that Mr. Wilson knows something about shooting a handgun.

This month, we're looking at Bill's 5x5. The 5x5 is a low round count (25 rounds) skills assessment that Bill came up with several years ago. For the drill, you'll need a handgun, at least two magazines, 25 rounds of ammo, an IDPA target, and something to write down times and hits. While a concealment garment isn't necessary, I shot this one from concealment with a (new to me) Glock 45 and my Glock 48.

Scoring for this drill is IDPA Vickers scoring. The drill is shot in four strings, with every string at ten yards. After shooting the separate strings, all the raw times are totaled up, and then penalties are added to give a final time.

The individual strings of fire are:

There's lots of things going on here. Four draws, a reload, a target transition (body to head), and some strong hand-only work.

Tips for Getting a Good Run

Before starting the first string, take the time to get a good stance and establish a natural point of aim (NPA). There's no shooting while moving on this one, so you're going to get your best performance by getting your stance and NPA established before you begin. Since you've got the time before the buzzer goes off, you might as well set yourself up for success.

On the draw strokes, make sure and start moving as soon as you hear the "B" of the "BBBEEEEPP." The sooner you start moving, the faster you can make it through the drill, and you want to be fast. If you're shooting from concealment, make sure and get the cover garment out of the way efficiently. Whether lifting a shirt to draw from an appendix rig or sweeping an open front shirt out of the way for a holster at your 4 o'clock, be smooth and efficient on getting it clear.

Regardless of whether or not you're shooting from concealment, you want to get a solid master shooting grip on the handgun. As I said earlier, you're looking to be as fast as possible, so you'll need that good master grip to help manage recoil.

For the first string, as soon as you start shooting, be aggressive on driving the gun back to the -0 zone in the body of the target. As soon as a shot breaks and the handgun starts to recoil, you should work on resetting and prepping the trigger as the gun goes through its cycle.

As soon as it's back in the -0, you want to break the subsequent shot. The -0 zone is an 8" circle, and there's no extra credit for a one-hole group. Take enough time, refine the sight picture to ensure a hit in the -0, and keep going. 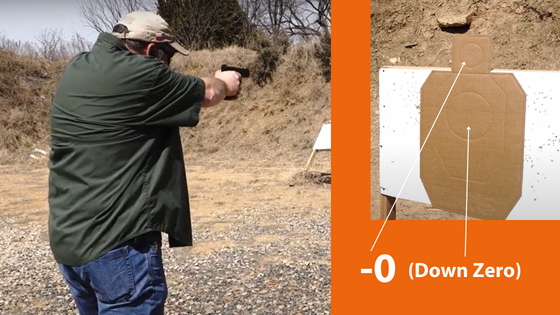 On the second string, the strong hand only string, go ahead and adjust your stance if you need to.

On the third string, much like the first string, refine your sight picture just enough between shots to ensure a good hit. As I said, there's no extra credit for putting everything through a single hole in the target. When you run the gun dry, keep the handgun up high as you work the reload. While your best efficiency on the reload is going to come from watching the new magazine go into the magwell, keeping the gun up high at the same level as the target will allow for faster visual shifts between everything that's going on. Once the new magazine has been inserted into the pistol, work the slide by whichever means you prefer. I prefer to rack the slide, but that's how I was taught to do things. We'll leave the argument between power stroking, sling-shotting, or using the slide stop for another day. Get the handgun back in action and get the last five rounds off as efficiently as possible.

The fourth and final string is the one with the headshot. While the first four rounds go into the body, I usually refine the sight picture on this string more. I keep the first four rounds in the top half of the -0 zone. While it doesn't give me any extra points, it keeps the handgun higher on the target, reducing the transition distance to the headshot. Much like strings one and three, once you transition to the head, take just enough time to refine the sight picture to get a good -0 hit. You might need a bit more time than you do for the body shot – that -0 circle in the head is half the size of the one in the body (4 inches as opposed to the 8-inch circle in the body).

Ranking According to Your Time

Once you've shot all the strings, tally up the raw times and check your hits. The drill is scored IDPA style. Add .5 seconds to the raw time for every point you are down. Then, you look at what Bill says to decide how you did.

What happens if you're over 50 seconds to complete the drill? You're not proficient enough with that handgun to carry it—time to practice more. If you need to, put up multiple targets and run each string on its own target to isolate where you're having the most difficulty so that you can spend some time focusing on the skills necessary to improve performance on that string (draw stroke, trigger press, recoil management, etc.).

So, how did I do? Not too bad with the Glock 45. I had a raw time of 20.6 with 2 points down (I got a little trigger-happy after the reload, and I didn't refine the headshot quite as well as I should have) for a total of 21.6. I was conservative on my first string, which hurt me time-wise, and I got a bit squirrely and sent a round just high after the reload on string three, which cost me a point, and not refining the sight picture on the final string cost me a point on the headshot. While not as good as I would like, I didn't beat myself too badly.

And how about the Glock 48?

Yeah, me and the 48 didn't get along too well that day. I was noticeably slower and had more points down with the Glock 48. I was unhappy with my performance with that little guy.

Before I use it as my primary concealed carry handgun, I need to spend a bit more time with it.

Give the Bill Wilson 5X5 a run, and let us know how you did!