I’m sure you’ve heard that XS Big Dot sights are not target sights. That’s true; the XS Big Dot and Standard Dot sights were designed for fighting. That however does not mean they’re not accurate. How accurate/effective can Big Dot Sights be? When I attended my first 250 Pistol Class at Gunsite Academy, I used a 1911 Commander outfitted with XS Big Dot Sights. As the week progressed it was clear there were several good shooters in the class; it looked like the last day shoot-off would be very competitive, and it was. But, after all the brass had hit the ground and the smoke had cleared, the Big Dot reigned supreme; I won the man-on-man shoot-off. How’d I do it? I put the dot over the spot I wanted to hit and pressed the trigger. I trusted the dot.

As opposed to a notch, with Big Dot sights, XS uses a rear sight with a wide V. This is very similar to the wide V used on dangerous game stopping rifles. The idea is that it’s faster to place that big, easy to see dot into the V than it is to put a front sight of any shape into a narrow notch. The reality is that the speed at which either can be done has less to do with the sight and more to do with the interaction between the human eye and brain. 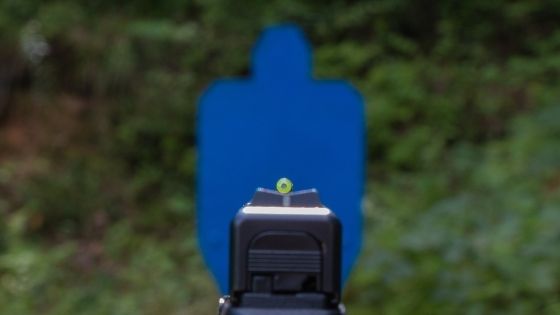 With the XS Big Dot sight, sight alignment is simple; dot the “i” in the shallow V of the rear sight with the bold easy to see front sight. With traditional notch and post sights your brain and eye try to even the gap on each side of the front sight before they will let your finger pull the trigger. This target panic can slow down your ability to shoot fast.

With the square notch rear and post front sight, the human eye has a tendency to attempt to perfectly center the front post in the notch so equal amounts of light can be seen on both sides. The problem is that our eyes don’t want to let our brain tell our finger to pull the trigger until that perfect alignment is found. Also, with conventional sights the front sight can seem to hide or get lost behind the rear sight. This can increase the amount of time needed to achieve a sight picture and to engage a threat.

With the wide V of the XS Big and Standard Dot rear sights, this attempted perfect centering is circumvented; the same tendency your eye has to center a front sight in the rear aperture of a peep sight on a rifle places the Big or Standard Dot in the center of the V, it just happens faster. Not only does it happen faster, Big Dot sights are bolder and easier to see; your eye recognizes them sooner, allowing you to trigger an aimed shot faster. It’s also impossible for that shallow V rear sight to hide the Big Dot front sight.

Accuracy can be defined in many ways, but regardless of how precise the definition might be, with defensive handguns “accurate” means bullets delivered to the desired point of impact. In a defensive shooting situation that “desired point of impact” is the vital zone. Discussions about accuracy, as it relates to defensive shooting, must be tempered by considerations of speed. You might be able to drive nails with your pistol, but if you cannot do it fast enough, it is of no consequence. The entire concept behind the Big and Standard Dot sights is to deliver the best balance of accuracy and speed. 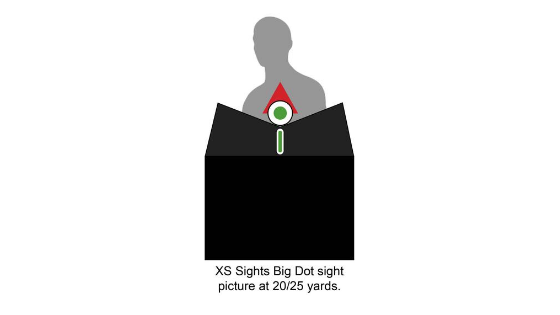 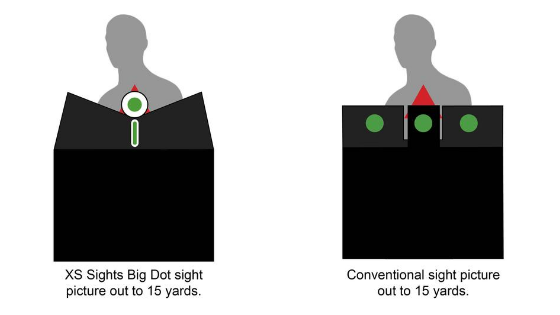 This diagram should clearly illustrate the simplicity of properly aligning XS Big Dot sights, as compared to traditional notch and post sights.

With conventional sights, most shooters use a sight picture where the desired point of impact is positioned directly above the front sight while the front post is perfectly aligned in the rear notch. With Big Dot sights, you place the dot directly over the desired point of impact just like you would when shooting a red dot sight on a defensive carbine. It might seem like a less precise sight picture, but once you begin trusting the dot, you start getting good hits, and you start getting them faster.

With further trust of the dot, you can also begin to shoot with a target/threat focus out to about five yards, and with practice, maybe even 10 yards or even further. Because the front sight is so easy to see, and because your eye naturally centers it over the desired area of impact – and in the center of the shallow V of the rear sight – this decreases engagement time. When it comes to saving your life, fractions of a second take on an entirely new meaning. Target/threat focus shooting with XS Big Dot sights is easy because the large bold front sight remains highly visible even when your focus is on the threat. 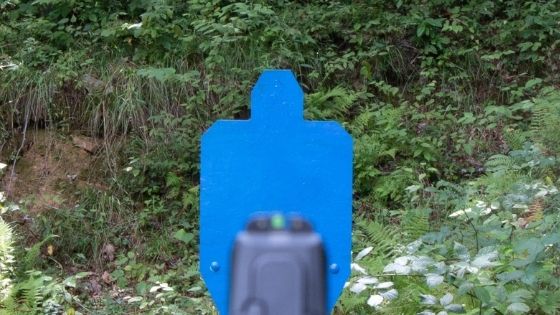 Target focus shooting with traditional sights can work but the sights are less visible and not as quick to align.

Regardless of the sight you’re using, as the distance to the target increases to 20 or 25 yards you must shift your sight alignment for precise accuracy. This is because the trajectory of the bullet is not flat; as soon as it leaves the barrel it begins arcing toward earth. Handgun sights are generally zeroed to first intersect this arc at somewhere between 7 and 10 yards. This means that past that distance, the arc of the bullet – at least for some time – will be above the line of sight.

The best way I’ve found to learn to trust Big Dot Sights is to start at a distance of about five yards while using a circle target that is about five inches in diameter. This will allow you to easily center the dot in the circle, and your bullets should land in the center of that circle. Work at that distance until you can put five shots in the circle in about five seconds. Then, increase the distance to about 10 yards. At 10 yards the Big Dot will almost fill the circle. Again, work to get five shots inside the circle in five seconds. 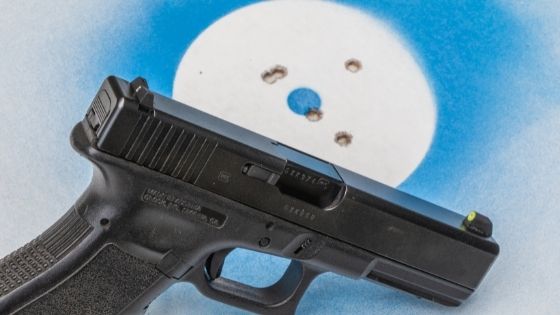 To learn to trust to dot, start working at about five yards with a five-inch circle target. This will help you learn to place the dot over the desired point of impact. The key to accurate shooting with XS Big and Standard Dot sights is to place the dot over the desired point of impact and then trust it.

When this becomes something you can do on demand, eliminate the circle target and work with a standard defensive handgun silhouette that – like a bad guy – has no defined aiming point. Start again at five yards and work your way back to 10, by placing the dot over the desired point of impact and pressing the trigger. Soon you’ll be delivering groups centered in the vital zone, and you will be doing it very fast; that big and bold dot is easy to pick up during recoil, allowing you to regain sight alignment quickly.

Once your eye and brain have become trained to trust the dot, go back to five yards and run the drill again but this time focus on the target and not the sights. You’ll still see that big dot, and you’ll still see it centered in that V, just don’t focus on it. This is what’s called target/threat focus shooting and with practice – and sights you don’t have to look for – it can be blistering fast. Remember, with a fighting handgun the goal is to balance accuracy with speed. Big dots do that best. The old saying that, “Speed is fine, but accuracy is final.” still applies, but accuracy faster is the finest of all.